On Wednesday, Stepping Stones Nigeria were presented with a cheque for £3000 to aid in their work harbouring, feeding and educating street children in the Niger Delta. This represented the 50th Consecutive occasion at which TASA have donated to a charity in the country in which Scotland is playing.

The presentation took place at the President Hotel, Russell Square, with representatives of the recipient charity travelling from their base in Lancaster to meet up with a dozen or so Scotland fans to receive our donation.

From Iceland in the North, Japan in the East, Jacksonville in the West and Bari in the South, Scotland fans have funded the bringing of a little sunshine into less fortunate children’s lives by their generous support of the Appeal.

From buying badges and T-shirts, to organising Golf Days and Quiz Nights, Scotland fans from all over the globe have enabled the Tartan Army Sunshine Appeal to do this in their name.

We are grateful for everyone’s continual and continuing support and we pledge to continue with the ethos of those who started the Appeal by donating “Everywhere We Go”!

The first trip of 2014 took Scotland to Warsaw for the International Friendly against Poland TASA selected Fundacja Dziecieca Fantazia – The Childrens Fantasy Foundation – to be the recipient of our 49th consecutive donation.  Their aim is to grant the wishes of terminally ill children all over Poland, no matter how big or small. They have been running for 10 years, in which time they have granted wishes for over 3,000 children.  We pledged our donation of £2,000 to help assist the charity in attempting to grant further wishes to children waiting, and at any one time, the charity can have over 1,000 requests.

On matchday, we were introduced to Paulinha from FDF who had organised the event on the charity’s side, and “the big boss” as she was introduced to us, Patrycja. Chairman Daly welcomed everyone, giving a short history of the Sunshine Appeal from its origins to the present. Patrcyja (translated by Paulinha) gave a similar background of FDF, and introduced us to each of the children, thanking us for choosing them as a recipient charity. The children had made small gifts for us, a card with some Polish translations, a football Scotland v Poland card with Polish footballing terms, a small model house of a standard Polish home, and a handcrafted wooden Poland/Scotland flag, which were very graciously received. We presented the cheque for £2,000, handed out some badges and chatted further with the parents and staff. 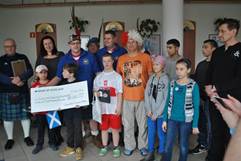 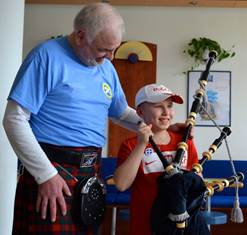 The really heart-breaking bit about it all for me, was discussing our future visit later this year for the Euro 2016 qualifiers – and being told it is unlikely the 5 children we met would still be around when we returned to Warsaw in October. Being able to contribute to such a big part of the 5 children’s wishes makes what we do so worthwhile, and that is only possible with the fantastic support we receive.  More here…

Our 48th consecutive presentation was made to Krisesenteret in Molde in Norway.  In their own words this is what they do for children.

A large group of children are also exposed to violence through witnessing violence between parents. The effect of witnessing violence is just as serious as if it was the child who was prone to violence.  For many children it is a relief to get to the shelter. We see the children in most cases settle out relatively quickly. The energy that was previously tied up in survival strategies can be released to the child when the surroundings are quiet and safe. Assurance, predictability and stability are very important in children’s lives, and this is no less important at the shelter. In seeking to achieve this, we emphasize structure and plans, as regular meals, bedtimes, school / daycare, activities, etc.

At the request of the recipient charity, the presentation itself was carried out at half-time at FC Molde. In attendance were Neil McDonald & Graeme Shinnie of TASA, Ronnie Young, Ingrid from Krisesenteret, officials from Molde FC and the Mayor of Molde.  Neil made a speech on Norwegian TV and presented a cheque plus a Scottish Parliamentary Motion praising the work of Krisesenteret to our Norwegian friends.  Full Story Here… 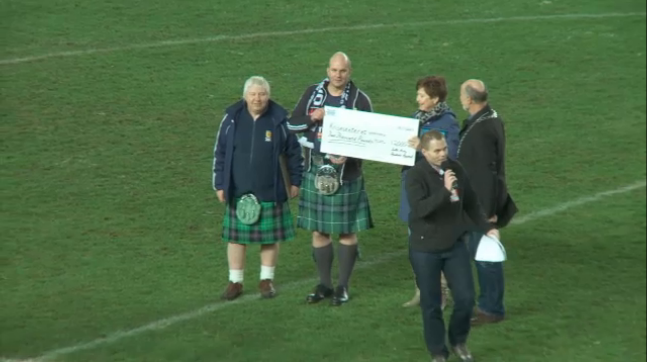 To mark the 47th consecutive donation from the Sunshine Appeal, we donated £2000 to the SOS Children’s Village in Skopje, Macedonia.  It has 12 family houses which provide shelter, care and education for 84 children without parents or parental care.  There were 67 children aged between 2 and 15 in the care of the village under 12 “SOS mothers”.

The donation from the Sunshine Appeal was used to:

The fans visited a family home in the Village, where they met SOS mother Divna, who has raised fourteen children. They were showed around the properties which have been well maintained and clearly looked after by the children and the mothers.  There was also time for a friendly game of football on the Village playground. 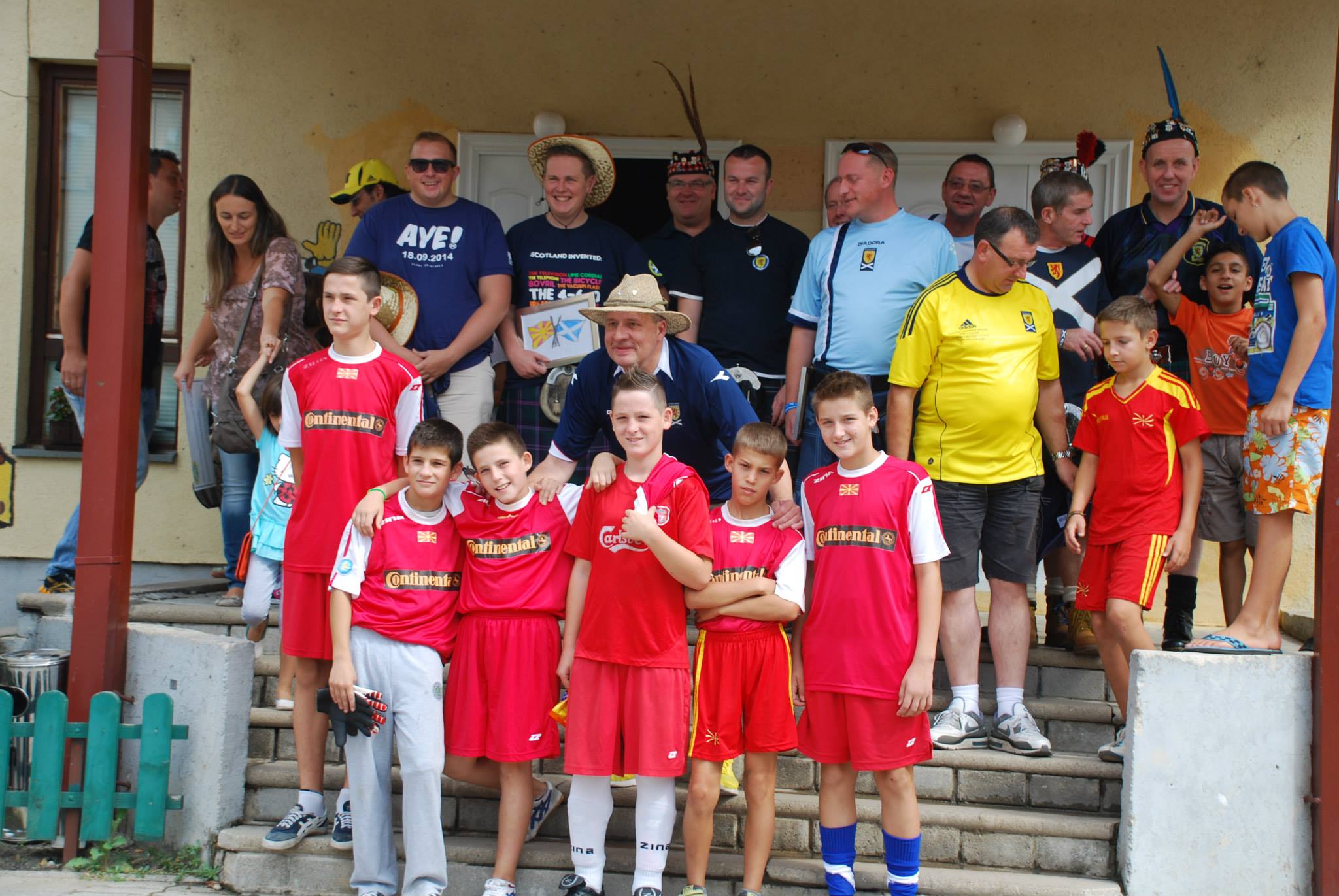 On the day the Scotland national team took on the Auld Enemy at Wembley, the Tartan Army Sunshine Appeal was keeping up a tradition by donating £2000 to a children’s charity based in London. The chosen charity was Radio Lollipop and marked the 46th consecutive donation for the Sunshine Appeal.

Radio Lollipop are an organization run entirely by volunteers who help out in hospitals across Britain, including Great Ormond Street, where the donation took place. The charity run a radio station and organise activities for the children that are unfortunate enough to be in the hospital. The volunteers visit the wards several nights a week with a trolley full of games and activities to keep the children entertained. The radio station organises competitions where the kids can win toys and other prizes.

The cheque presentation started with a tour of the radio station which has been set up in an old subway train. The Sunshine Appeal were pleased to hand over the £2000 that will go towards supplies and radio equipment so that the charity can continue to help the children at Great Ormond Street. 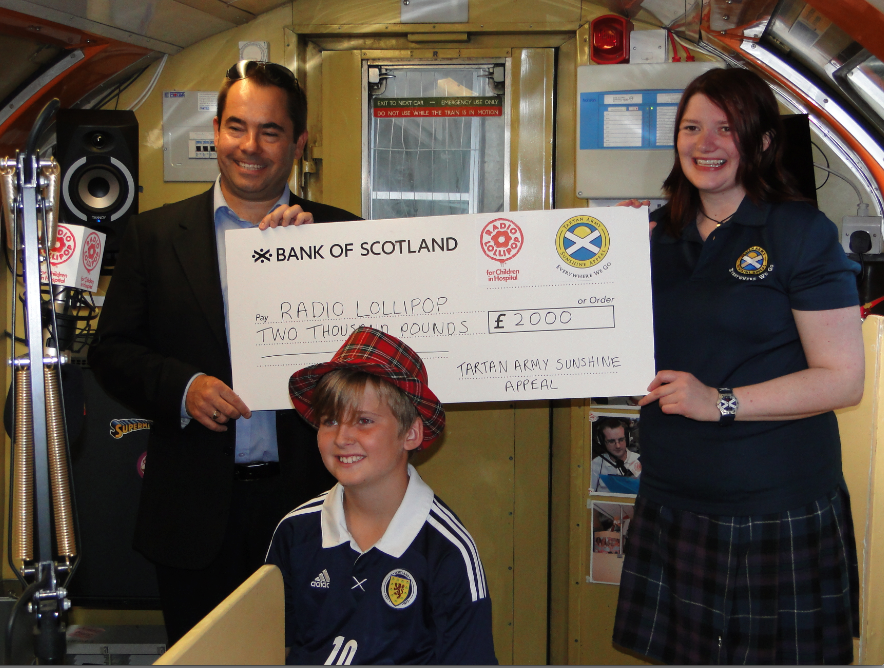 A couple of weeks after the donation presentation, we visited Radio Lollipop again and dropped off a couple of sacks full of soft toys for them to use as they saw fit. More pictures here…