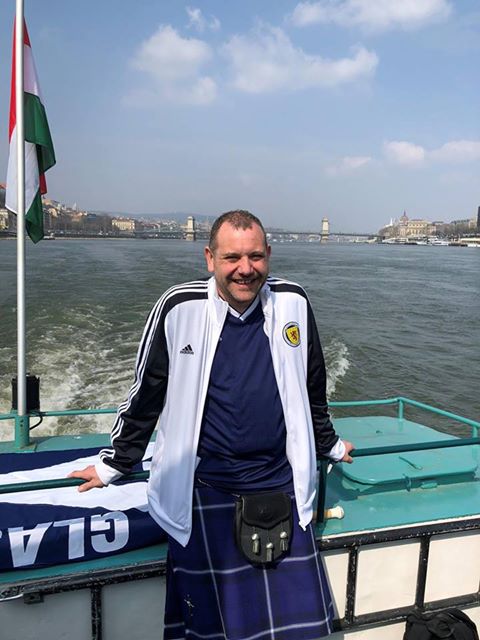 I’ve been following Scotland for years, since my dad took me along to Hampden at 4 years old. I was then taken along to almost every home game for the next 14 years and then went for my first 3 away games with pals – the exotic locations for these games were Birmingham & London. I made it to Monaco the next year for the rearranged Estonia game then to France 98 and kind of assumed that would be summer sorted every couple of years from then on, but probably the less said about that assumption the better. I then fell away from the away games for a few years, but continued to attend home games & post on the Tartan Army Message Board.

The TAMB is where I first really heard about the Sunshine Appeal & the work they do. My first experience of a TASA donation was in Dublin in June 2015. A few of us had traveled over & were looking for something to do the night before the game.  I had heard through the TAMB about an event in Slattery’s pub down near the ground which was to include the TASA presentation to Aoibheann’s Pink Tie, an Irish Children’s Cancer Charity. We never really thought much about the presentation, until it started. I honestly don’t think I have ever seen a group of football fans so silent & captivated by somebody talking on stage as when the father who had started the charity was speaking.

In my group, most of us had kids around the same age as his daughter was when she died, so it really hit home to us how important charities like this were – and I think it’s fair to say, across the Scotland support that night, there were plenty “wiping specs of dust out their eyes” so to speak. Since that night, I’ve kept a keener eye on TASA’s work and have been privileged to be able to attend the last 2 donations in Israel & Albania. The Albania presentation was especially good to attend as it took place in the Center the charity use for their work. To not only meet the kids but also see round the Jonathan Centre where the money will be used was a fantastic experience. I hope to be able to attend more presentations in the future, and to all on the steering committee, keep up the good work.