It is now under 5 weeks till the Loch Ness Marathon and it is starting to get very real. I have been out in the morning with Poppy for the last few weeks getting my stamina up and the next target is the Barry Buddons half marathon in Carnoustie this weekend where I hope to get close to the 2 hour mark. Quite happy with how my predictions are progressing, Hearts are of course top of the Championship after a very fine start to the campaign and the Fair City Tartan Army made it a cup double at the ATAC seven a side tournament in Scone in July, I even managed a couple of saves in the shootout in the semi final and a clean sheet in the final so obviously very pleased with that. 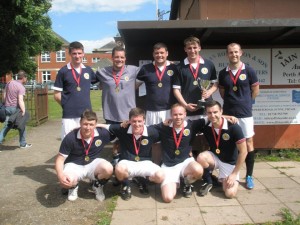 Have cut out the drink in the last few weeks as well as being off the cigarettes for over 8 months now and have noticed a big difference there. With a visit to Germany coming up a week on Saturday I will be having a four day holiday from my training and I may also have a shandy or two, its a new campaign with new hope after all !!!
Was also nominated for the Ice Bucket Challenge which i did after a 10km run around the village and found it very refreshing. So if there are any volunteers who fancy chucking ice buckets over me or even firing super soakers at me at mile intervals on the 28th then that would be great.

Its been a while since my last update.

Well my training took a massive downturn in the middle of February when I was floored with pneumonia for several weeks which left me physically drained and housebound which was a complete nightmare. Not only did my training take a hit but I was ruled our of the following weeks trip to Warsaw for the Scotland v Poland match.

So February and March were pretty quiet, my aim was to get as ‘match fit’ for the ATAC Tartan Army Cup Final on the 5th April which I managed and the Fair City Tartan Army emerged victorious in a fantastic final against Bonnybridge at the Falkirk Stadium

And then it was onto the Behind The Wall pub in Falkirk for a tremendous post match party with the Bonnybridge boys and Ted Christopher.

There were a few sore heads the next day.

Got back running and walking the dog fairly short distances to try and get my stamina up and my weight down ahead of the 16 week target I had set myself to start the ‘proper training’.

I had a 10 day break in Kefalonia which meant I missed another Scotland away game, this time at Craven Cottage against the Nigerians although I did manage several early morning jogs along the coastlines which was very pleasant.

So now that the proper training has started its amazing to think ahead 16 weeks to the day of the race to see what will have unfolded by the time I will be starting the race.

Will Scotland be sitting top of group D?

Will Heart of Midlothian be out of admin and top of the Championship?

Will the FCTA have won the Tartan Army sevens tournament?

Will I have gone round Murrayshall in under 100 on the Perthshire Kilted Golf Day in aid of the Sunshine Appeal?

Hopefully all the above happen but I wont have too much time to celebrate the above and my birthday on the 22nd September as I will have to take my place on the starting line at Loch Ness on the 29th September.

Ah well there is always that trip to Warsaw the following week.

Well it has been an active couple of weeks again, last Sunday we decided to climb the first Munro of the year, so we thought Ben Chonzie would be the ideal one to break us into the new Munro year gently and also as it was fairly local.

We arrived there at 9am with my usual Munro pals George, Andy and dog poppy and also my neighbour Stefan Clos, no not that one, and set off up the path. It was a lovely morning and we were all enjoying it until we got within a mile of the top when the snow came in and it was blizzards in your face whichever way you turned. We reached what we thought was the peak (my phone was telling me we had climbed the right distance and were at the right height) but as it was all covered in snow and was bitterly cold we were not hanging about to find a pile of rocks so it was a quick photo and back down again. 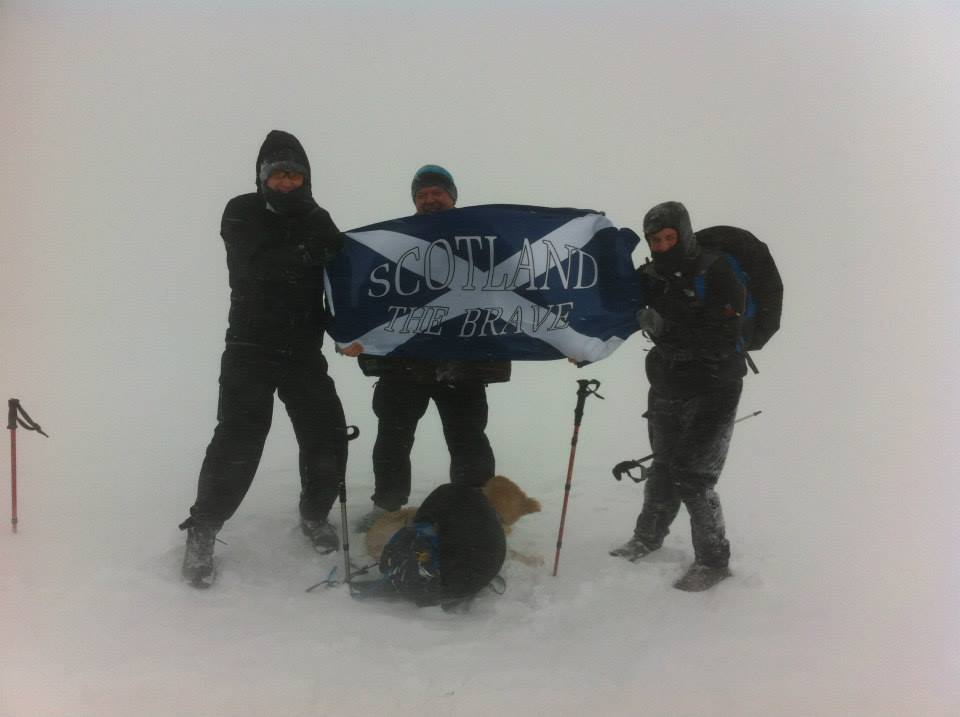 Flag at the top 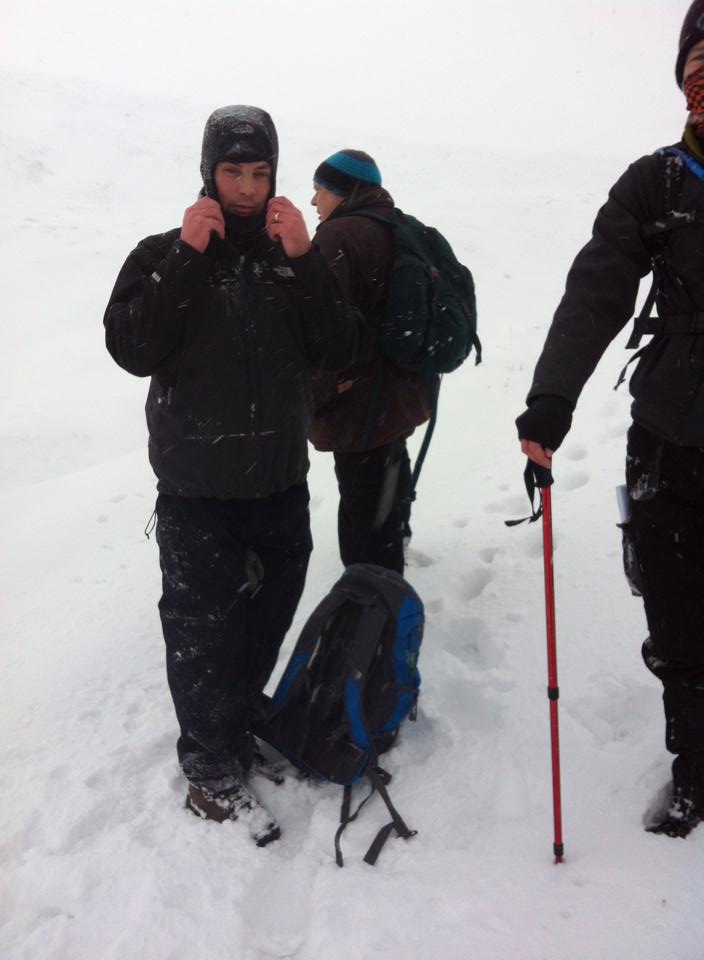 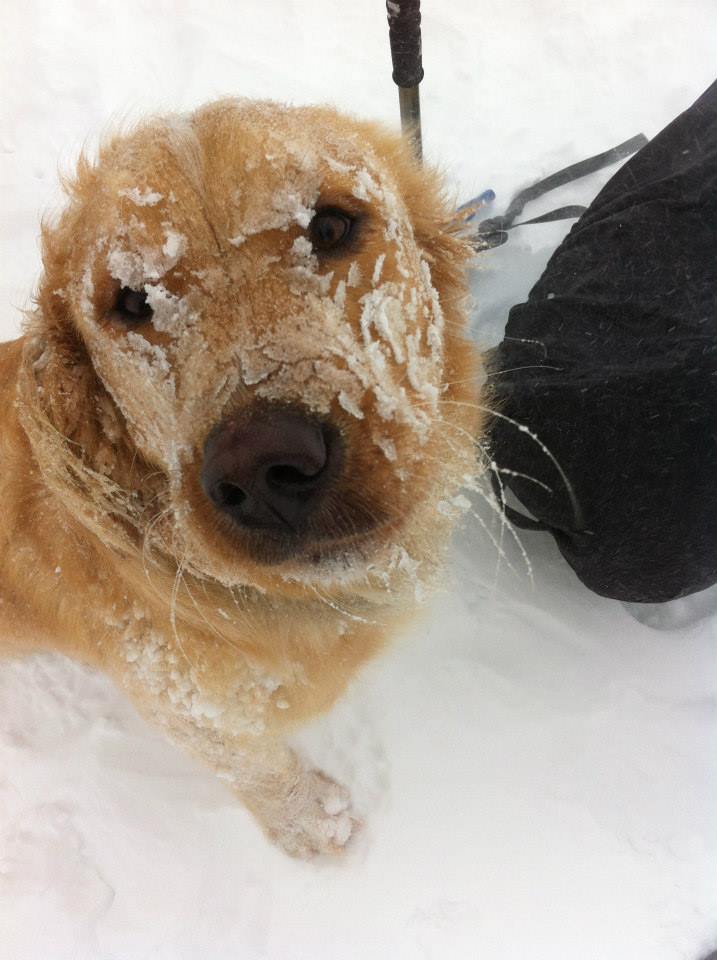 Training is still going well and I am noticing a difference on the fives pitch, I was used to my fitness and my ability being the two things that let me down, now its just my ability but I don’t think that’s ever going to change

So now its 52 days without a cigarette, drinking only at the weekends and losing a further five pounds is having its benefits and certainly noticeable when on the treadmill and out jogging with poppy. 270 training miles now on the clock
If anyone is thinking about stopping smoking I would recommend giving vaping a shot, i have reduced the nicotine down to a low level now and plan to go to zero on the next set of liquids I buy, can honestly say I have noticed a huge difference and it has given my wife one less thing to moan about.

After completing various events for worthy charities and good causes in the previous 3 years, such as the 75-mile ‘Tour de Tay’, the 26 mile Kiltwalk and climbing Schiehallion last year (which has led to a lot of Munro Bagging as well as doing Tough Mudder just for fun) I decided to up the stakes and complete a marathon this year.

After looking at the ones in Scotland I decided the Loch Ness one was the one for me as I didn’t really fancy running in the city (being a county boy now) and as it was in September it gave me plenty of time to prepare.

So on the 5th January I signed up for the event which gave me exactly 38 weeks to prepare.

I decided to run for the Tartan Army Sunshine Appeal because as a regular traveller with Scotland having nearly 30 games under my belt, I had heard a lot of the good work and donations that had taken place all over Europe and beyond by the Sunshine Appeal and although I had contributed some leftover Serbian Dinars here and some Lithuanian Litas there, I felt I could do a bit more.

I have spent a bit of time researching training for marathons and there was a lot of 16-20 week programmes to prepare for one, but, as I have a lot more time I am going to spend the first 4 months getting out on a daily basis going for runs and walks and then follow a training programme for the final 20 weeks.

I am lucky enough to live in the Carse of Gowrie so there are some great paths and forests to run through. Have started with a short run in the morning and a longer one in the evening and have taken on full dog walking duties of my wife’s dog Poppy to get my stamina up.

So 2 weeks into the training and 95 miles of training later and we are down 6 pounds closer to my target weight for the race, cutting back on the booze and giving up the fags (37 days now) have made a big difference.

Keep tuned and I’ll update you periodically as I go.

If you would like to support Ally in his fundraising, you can sponsor him here https://mydonate.bt.com/fundraisers/alasdairsmith1