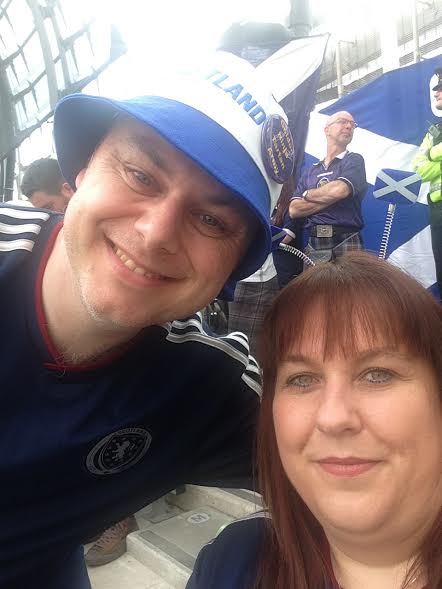 It was March 2013, when we attended our first away match, a trip to Serbia via Budapest. We didn’t have any match tickets, we were just along for the ride, the craic and to visit someplace new. Along the way we were fortunate enough to get some tickets to the match. The SFA travel guide was terrifying, the armed border guards on the train didn’t help much. Then there was the riot police lining our route to the stadium. In the build up to the match, it’s fair to say, we were a bit tense.

After the final whistle we were held in the ground for 15 minutes for our own safety. As we walked through the tunnel from the stadium, we could see that our route was again lined with riot police.  Behind the riot police the Serbian supporters had congregated 5-6 deep, but they were not there to jeer as we feared, they where there to applaud and take photos and swap jerseys. We were confused…

We asked more seasoned TA foot soldiers what was going on? They explained that the Tartan Army had had a lot of publicity in the days leading up to the game. Two things had made the Serbian news. Firstly, a band of kilted (and some bare-chested) TA foot soldiers, had turned up at the stadium on the morning of the match to help clear 3 inches of snow from the pitch to ensure the match went ahead. If you’ve not seen it… take a look.

The other thing that had made the news was the Tartan Army Sunshine Appeal – a £1500 donation was made to the Novi Sad branch of SOS Kinderdorf, an international organisation which provides quality alternative care for children who cannot live with their own families. £1500, is a lot of money, but in a country like Serbia and to these kids, it is a huge amount of money.

A Google search turned up some photos of the events earlier in the day, the presentation of the cheque, followed by a game of football in the snow. After the match we headed to Belgrade for a few days. Even there, they stopped us in the streets and thanked us for supporting the children.  We hadn’t contributed anything to these events. We felt totally fraudulent, but it made us immensely proud to be Scottish. It’s fair to say, we were hooked!

Since then, we have pretty much attended every game and were proud to reach 10 points in France!  We have loved meeting new people, the banter and the chances to see places we otherwise may have not. Along the way, we have been more keen in supporting the work of the Tartan Army Sunshine Appeal and the great work they do to make donations that help make a real difference to children’s lives around the world. It’s been challenging stuff…we have drunk a hell of a lot of beer and done a hell of a lot of socialising at nights out and events. As well as being proud owners of the T-shirts, bucket hats and other merchandise…it’s for the children, you understand….

There are a number of dedicated people behind the scenes of the Tartan Army Sunshine Appeal to make sure these donations happen.  Un-sung tartan heros who keep the wheels turning. They collect left-over travel cash, print and sell T-shirts, organise day trips, events, buses… all in an effort to make sure that these presentations can continue. Currently the target is a £5000 donation at each and every away match.

During the trip to Portugal for the Gibraltar game, we were talking about Direct Debits we pay to other charities. Tracy Haggart suggested that we should do that for the Tartan Army Sunshine Appeal… so that’s what we did. When we got back, we set up a monthly payment. It was quick and easy to do and we hardly notice it’s gone – drop the Tartan Army Sunshine Appeal an email (info@tasunshineappeal.co.uk) and they’ll provide you with the details needed to set this up with your own bank. If this isn’t your thing, these page lists all the other ways of making a donation:

Let’s leave you with something to think about.

Using 2016 as an example, the Tartan Army Sunshine Appeal needed to raise around £30,000 to cover donations. With a rough average attendance at away games of 5000 – put simply – this means a donation of £1 per foot soldier per game (or £6 this year) would cover this cost…

So ask yourself… if could you afford a donation of £1 to the Tartan Army Sunshine Appeal for every away match you attend, then why not spread it conveniently throughout the year and set up a monthly payment of 50p a month?.

If you’re feeling generous, why not make it even more?… then Then perhaps next year we will be discussing a £10k Tartan Army Sunshine Appeal donation per trip. Wouldn’t that be something?