Back in March we ended up with a few spare tickets for the home international friendly against Northern Ireland.  We decided to donate these to Sense Scotland.

The tickets were passed on to the Overbridge Service (residential care on St Andrews Drive http://www.sensescotland.org.uk/media/1501870/sense-scotland-residential-services-overbridge-web.pdf ) where two of the people they support went along to the match. It was their first ever game and by all accounts they absolutely loved it!  They must have seen a different game to us!

Here’s a wee report from Service Manager, Sean Macfarlane, on what happened on the night.

“Stewart, Graeme and their support staff had a fantastic time at the Scotland V NI football game, soaking up the atmosphere and singing songs, especially when Scotland scored Stewart and Graeme were shouting ‘Goalllll’, this was the first time both boys had attended a football match and they both purchased a Scotland scarf as a souvenir and reminder of their experience.” 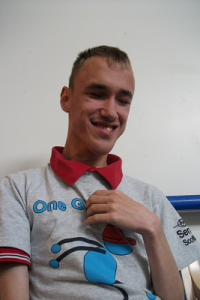 “We are very grateful for the donation of the tickets from The Tartan Army Sunshine Appeal which allowed Stewart and Graeme the opportunity to experience a football match.”

Why not have a look at TASA’s ebay shop here.