At last night’s WESTA meeting (30th August), Derek Moore (MD at Kelburn Brewing) presented a cheque on behalf of the brewery to the Tartan Army Sunshine Appeal. Kelburn had pledged to donate to The Appeal for every bottle of their “Tartan Army” beer sold at Lidl. The campaign raised £500 for the Sunshine Appeal. 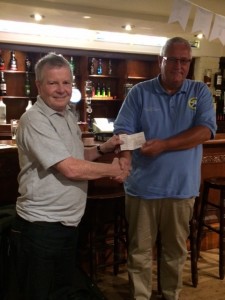