When we turned our minds to the Dublin donation, I thought of You Boys In Green.

We had previously worked with the Irish fans’ group when we were last visiting Dublin. They told us that one of their favourite charities was one called “Aoibheann’s Pink Tie”.
http://www.aoibheannspinktie.ie/
This is a charity that offers practical help to children and the families of children who are fighting cancer.  This charity ticked all the boxes for us, so contact was made with Aoibheann’s Pink Tie through the good offices of YBIG.  Stunned as they were by our approach, the people behind the charity were more than keen to accept our donation of £5000/€7000.
YBIG organised a joint Irish/Scottish fans’ night in Slattery’s Bar in Dublin on the eve of the match for the presentation of the cheque.  Prior to going to the venue, my wife Marion and I met with Jimmy Norman and Mick Rochford at our hotel. The charity is named after Jimmy’s young daughter, Aoibheann, who lost her young life to cancer several years earlier. It quickly became clear that these were two remarkable men, doing remarkable things with a remarkable charity. It was humbling to hear their story.
On to the shenanigans at Slattery’s. It was pleasing to see so many Scots having turned up to support the event. All told there were several hundred Scottish and Irish fans all enjoying themselves together.
The presentation was duly made. I murdered a bit of Irish Gaelic and Jimmy made an emotional speech. Jimmy gave the Sunshine Appeal a bag of “chemo ducks” to bring back to Scotland to give to Yorkhill Childrens’ Hospital.
One of the more enjoyable presentations that I’ve made, but one that will leave me with lasting memories.
John Daly
(Chairman – Tartan Army Sunshine Appeal) 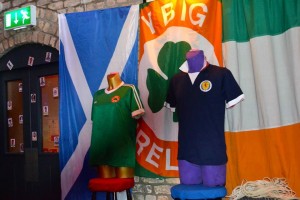 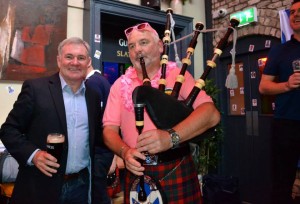 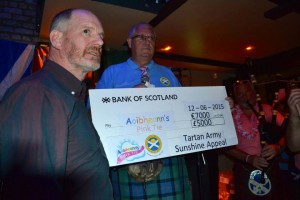 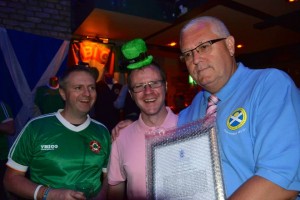 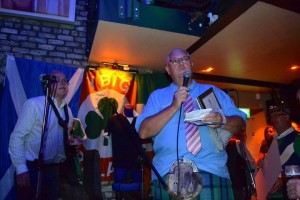 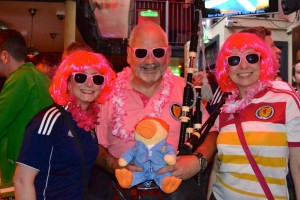