Matchday, 14th October 2014 and an 11:15 meeting at the Ibis Stare Miasto.  Too early for a few who hadn’t made it, and too early for a few who had.  Four members of the TASA Steering Group (June, Kevin, Gareth and myself) had gathered along with 4 of the charity’s supporters Mel Robertson, Ali Smith and the two Davids, (sorry guys, I didn’t get your surnames).  Also present was regular TASA piper Dougie Wotherspoon.  Alas with a broken arm, and therefore his pipes remained at home.

Major General Callison had already sorted out the transport arrangements and since a match ticket meant free transport in the city that day, we jumped on a tram outside the Ibis which took us a few miles away from the city centre and all but the last few hundred yards to the recipients of our 53rd consecutive donation: Fundacja Pomocy Dzieciom z Choroba Nowotworowa (Foundation For Children With Cancer).  The centre facilitates the attendance at oncology clinics of children with cancer while they wait for a place in the hospital.  It also provides a place in the city for parents to stay while their children are undergoing treatment and funds trips to allow children to continue as normal a life as possible while their health is anything but.

We were joined on location by Derek and Ross Hardie, the piper who’d stepped in to replace Dougie.  Special thanks are due to Ross for this, not least because he had all his travel money stolen during transit the previous day and must have had plenty of other things to worry about.

We were greeted by Emilia Kotarska who works with the foundation and a guy who works for a company who rent space from the foundation – which we were later to discover provides them with important guaranteed income with which to support their activities.   Both provided great translation services on the day for which we were grateful.  They introduced us to the president of the foundation, Daniela Mroczek, and we received a welcome cup of coffee and some cake in their reception room.  Emilia’s young daughter and Daniela both tried on my glengarry (natch), and we were each presented with a small, wooden, hand painted angel which the children had made for us.  A lovely touch.

We then went out onto the balcony for a “small concert” from Ross.  The sound of the pipes attracting spectators from neighbouring buildings.  Daniela then told us a little bit about the history of the foundation and how much it cost to run – around £300,000 a year in fact.  It meant that we were providing exactly 1% of those funds with our £3000 donation.  I reciprocated with a short history of TASA at which point the obligatory photos with the large cheque were taken.  Daniela then presented us with a framed painting created by the children and we in turn presented the Scottish Parliamentary Motion carried over by Gareth. 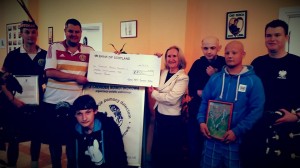 After the ceremonials were complete, Daniela took us on a tour of the facilities.  The building has 32 beds, a kitchen where parents prepare meals for themselves and their children, a dining room, laundry, drying room, spaces for the organisation of free time, a children’s play room, computer lab, gym, conference room and a chapel.  It left us with the impression that they were providing an invaluable service to families when they felt at their most vulnerable.

Throughout the morning’s events we were accompanied by three older children (as can be seen in some of the photos).  I must say, for what they must have been going through, their cheeriness at all times was truly humbling.

Finally, grateful thanks to those who attended the presentation and to all our wonderful supporters without whom none of what we do would be possible.

You can read a passage about our visit in the charity’s own words here:
http://fundacja.net/szkoci-w-fundacji/

And there was even a mention for the donation in the Polish National news:
http://wiadomosci.tvp.pl/17241373/szkoci-w-warszawie 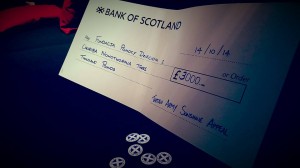 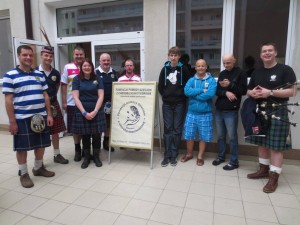 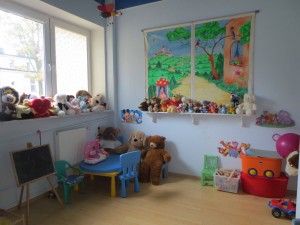