At the time, (owing to something of an administrative oversight), this was celebrated as a landmark occasion, our 50th consecutive donation. It proved to be a difficult affair to organise though. The National team were playing Nigeria in an international friendly at Craven Cottage, London on the 28th May 2014 and the steering group were having some trouble identifying a suitable charity to be the recipient of our £3,000 donation.

As usual, the resourcefulness of the steering group came through and Stepping Stones, Nigeria were eventually identified. Stepping Stones are based in Lancaster in England,  but work within Nigeria assisting street children who suffer violence and  neglect. At the time of the donation, Stepping Stones were heavily involved in assisting families of the 200 schoolgirls who had been kidnapped in Nigeria.  They also assist children who are stigmatised as witches, and are often abandoned, tortured and sometimes killed.

At 11am on the morning of the 28th May, the donation was made within the Presidents Hotel, Russell Square, London, where Neil Forbes Vice Chair of the Sunshine Appeal, praised the work of Stepping Stones. He then presented Lisa Atkins with a cheque for £3,000, in the presence of several Scotland supporters, and the Sunshine Appeal piper, Dougie Wotherspoon, who entertained the crowd with a few tunes. 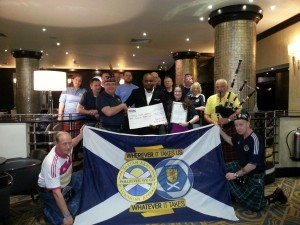