This donation was something of a conundrum for us.  We donate in every country we play, but usually it means you’re playing against the country you are visiting at the time!  Donating to a Brazilian charity based in London seemed to be the best solution.

The Tartan Army Sunshine Appeal chose to make a donation to Task Brasil to commemorate Scotland’s friendly with Brazil at the Emirates Stadium in London, 27 March 2011

There are many terrifying realities that force countless children onto the streets: domestic violence, being orphaned or abandoned, or simply belonging to dysfunctional families.

For most, there is no way back.

Task Brasil Trust was established in the UK in 1992 in response to the situation of the street children of Brazil. Its projects improve the lives and support the needs of children and pregnant girls living on the streets.

We visited the offices of Task Brasil on the morning of the game and presented a cheque for £1000 to the officials of the organisation. 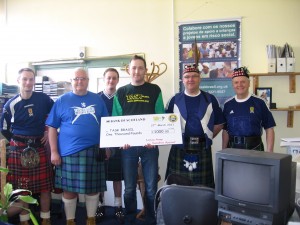