We set off in plenty time, determined that we not be late for our meeting at the MinStoraDag offices, so much so, that despite a 20 minute circular tour around the streets, we ended up outside the offices about an hour ahead of schedule. After a quick circuit of the square around the corner, we headed back to the charity offices for our 12 o clock meeting.
We were heading to the offices of MinStoraDag, translated “My Big Day”. This donation differed to others in that they do not actually care for any children on premises in the same way as hospitals or orphanages do. The aim of the charity is to grant wishes of critically ill children with life threatening diseases, no matter how big or small that wish may be.

We were welcomed by Claire Rosvall and her team, in a vibrant and brightly coloured reception area, and were given an insight to the work of the charity. We were shown to a small room to the right of the reception, in which the children play on the Wii, watch DVDs, or play board games when they visit with their families to meet with the team to organize their special day or event.

The back wall was a photograph collage of many past projects, both big and small; differing from skiing trips to days in New York, or a trip to a local sporting event, or even just as simple as a young girl who wished for a puppy.  In the centre, a huge picture of a motor show held at Mantorp park, in which the charity helped organize and took around 60 kids along for a day out. (see photo 1)

Looking through the many other pictures, one in particular that caught my eye was a photo was a young boy, around 7 or 8, with someone that I immediately recognized as Henrik Larsson. Looking closer, Larsson was accompanied by Swedish superstar Zlatan Ibrahimovic, and Swedish legends Marcus Allback and Freddie Ljunberg. Claire went on to tell us about the boys day out at Helsingborg and the VIP treatment before and after the game, meeting the players, and enjoying a meal, then meeting the Swedish superstars after the game. Claire commented that trips to Barcelona and to meet Ibrahimovic in particular were always a popular selection of a wish, and she was grateful to him on several occasions for being so good in the organization of these days.

Another noticeable feature in around 1/3rd of the pictures, was the presence of a beautiful and glamourous woman:-  Princess Madelaine, who has become the patron and big supporter of the work of the charity. On many occasions she has visited the children involved with the charity in hospital or at the charity itself to meet the families and the children, and participate on occasion, in some of the activities with the children. 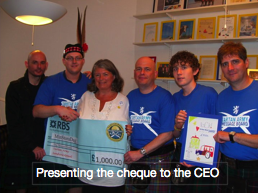 Following our tour around, and hearing of some of the wonderful projects, we exchanged badges, and presented Claire with the cheque of £1,000 from the Sunshine Appeal, and received a lovely drawing made by the children the week before, as a small gift of appreciation. (See photo) 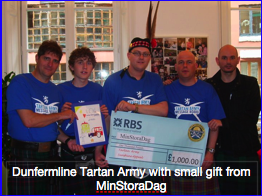 We were then invited to join the staff for lunch, and chatted about some of the other projects they had carried out. They were also keen to learn a bit about the Sunshine Appeal and some of the projects and were very interested and somewhat surprised as to how a group of football supporters were interested in helping out charities abroad, but were very grateful for our donation, and in particular, glad we had chosen them!

After roughly 2 hours in the offices, we thanked them for their hospitality, and the wished us luck with the game (some use that did!) and they even offered one of the staff to walk us through the maze of Stockholm’s streets to the Dubliner