The task of finding an organisation to donate to in Graz was made considerably easier by having footsoldier Mark (Dicko) Dickson living and working there.  With some assistance from a colleague of Mark`s,  Steirische Kinderkrebshilfe was identified.  This was a regional charity which assisted families of and children with cancer and once contact had been made, they were able to indicate some of the things the Sunshine Appeal donation would allow them to buy.  They needed one if not two buggies, memory cards for playstations, various puzzles and games and baby toys. 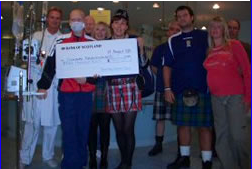 On match day a group of footsoldiers attended the Children`s Cancer Ward in the hospital in Graz and presented a dummy cheque from the Tartan Army Sunshine Appeal.  The company Mark is employed by wanted to supplement the Sunshine Appeal donation by 500 euros.  This news was welcomed and it was expected this would allow another hi-spec buggy to be bought for babies and toddlers having to attend hospital.

Thanks to all who came along to the hospital (and gave some of us a lift!).
Not so many kids in evidence at this presentation, but another worthwhile donation spreading the generosity and thoughtfulness of the Tartan Army nonetheless.